Twitch Sings is a game that is now on borrowed time, but since we are planning on featuring it so many times between now and January 1, 2021 (the game’s shutdown date) we figured it would be best to still go ahead and put together this FAQ page so viewers can understand how the game works and how they can get involved in choosing songs and participating in the streams. 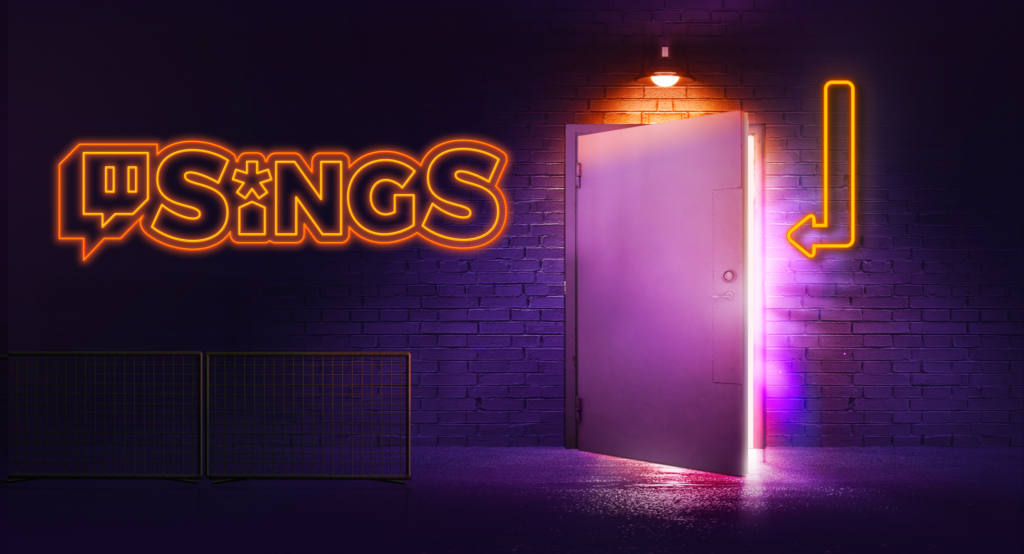 HOW TO INTERACT WITH TWITCH SINGS

Make sure you do NOT have overlays disabled on Twitch! (Whether this is an option built-in to Twitch or something offered through a browser extension.) All of the interactivity with Twitch Sings comes from the game’s built-in stream overlay. You should see a little square on the right-hand side of the video player on Twitch with the game’s logo inside of it (the purple and orange asterisk above the letter “I” in the image above).

Any time there is something you can interact with this overlay should activate (if not you might need to click on it, etc). There are three main times you’ll see the overlay become active:

Simply follow the directions in the overlay as they appear and it should close automatically until the next time your input is needed. Keep in mind that sometimes the overlay doesn’t keep up with the song very well and sometimes doesn’t even open at all, this is just a known issue with Twitch Sings. If it keeps doing this to you, reload the stream page.

Q: So what’s the deal with Draco being able to sing? Where’d that random mediocre talent come from?
A: Draco was formerly associated with a number of musical acts, both novelty and otherwise, dating back to the late nineties. He picked up on how to sing through coaching and performing live. His vocal range has also been assisted casually over time through the help of games such as Twitch Sings which help keep pitch in check.

Q: Is there a list of every song available for Twitch Sings somewhere?
A: Yes, that page is HERE.

Q: Will Draco sing ANY song from this list?
A: Probably not. The game has a “Favorites” option that Draco refers to when picking songs or putting things to an audience vote. If there’s a certain song you want to hear, see if you can catch it in the list of Favorites. If it’s there that either means Draco knows the song or has been meaning to learn/practice it. Occasionally he will perform songs from the major list, though these are generally ones he’s never heard before or are otherwise unfamiliar with.

Q: Do I have to pay (Bits, etc) to make a request?
A: No, but if you’re having a good time it would be nice if you threw some spare change into the open guitar case, so to speak.

Q: Can I request a song NOT on this list?
A: No, there would be no way to perform a song such as that because we don’t have access to the instrumentals or the lyrics.

Q: Will Draco sing a song twice in the same stream?
A: Generally not by request, but if it appears in an audience vote twice (or is requested and then later appears in a vote) then yes.

Q: This song sounds off, what’s wrong with it?
A: Assuming you are not referring to Draco’s singing, Twitch Sings uses only cover versions of songs as opposed to studio recordings from the actual bands. This is for copyright reasons. Sometimes these covers don’t sound too great and have that weird “Casio keyboard” vibe to them; this really can’t be helped, we’re at the mercy of what’s on offer.

Q: Who picks the four songs when an audience vote is started?
A: Twitch Sings generates a list of four songs randomly chosen from the “Favorites” category. Usually there’s at least one good pick in there.

Q: I voted on a “singing challenge” and Draco didn’t attempt it. Why?
A: He either didn’t see the challenge pop up, or if he’s singing a song that is personally meaningful to him he’s not going to “sing like a whale” in the middle of it.

Q: What does it mean when it says I am the “Most Excited” at the end of a song?
A: You posted the most messages in chat during the performance. Please don’t spam to get the “Most Excited” title, it doesn’t grant you any special privileges on the stream or in the game. There are also other awards given out for users who subscribe or contribute the most Bits during a performance. (These also do not come with any perks.)

Q: So… when is Twitch Sings going to kick the bucket?
A: January 1, 2021. We will be having a special mini-marathon stream on December 31, 2020 to ring in the new year and send Twitch Sings off into the ether.