Welcome to Gatorbox, a production of Gator Company since 2012.

Right now you’re on Gatorbox’s official website. Yeah, that’s a Van Halen song in the channel trailer over there, and yeah YouTube went ahead and copyright claimed it for the band’s label. Doesn’t really bother us and that’s because as you’ll soon see from checking out this stream that it’s more about the community than making a quick buck on YouTube.

Gatorbox has been broadcasting since 2012 and since its inception a substantial majority of its funding (90%+) has come from fan support. So yeah, Sammy Hagar can take the 4¢ that video would’ve made because we know that an awesome trailer like that is what’ll grab folks like you looking for an off-the-beaten-path channel to watch and a new online place to call home. Welcome to Gatorbox! 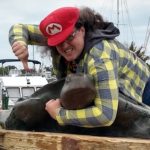 Gatorbox is anchored and produced by Draco, whose full canonical name within the series is “Draco No-Last-Name-Given”. He’s kind of like Bono, or Cher, in that regard. Just minus the musical talent? Maybe? He began writing comedy in 1995 and throughout the years that followed has recorded spoken-word comedy albums, written and starred in web video series, and sporadically written about video games for various outlets. Draco joined the Gatorbox project in 2012 as one of its initial cast members.

Nessie Devereaux, better known by her abbreviated nickname Ness, is the often seen but rarely heard member of the Gatorbox show. (It’s because she’s never mic’d up properly, we swear.) Her role in the show is to act as Draco’s folly and usually has something snide to say that can be inferred from Draco’s responses to her dialog… considering Draco actually speaks into the microphone.

We tell some raunchy jokes and sometimes get into a little bit of trouble on Gatorbox, but ultimately we’re a force for good. Here are some video game speedrunning charities we support and have assisted in fundraising with: